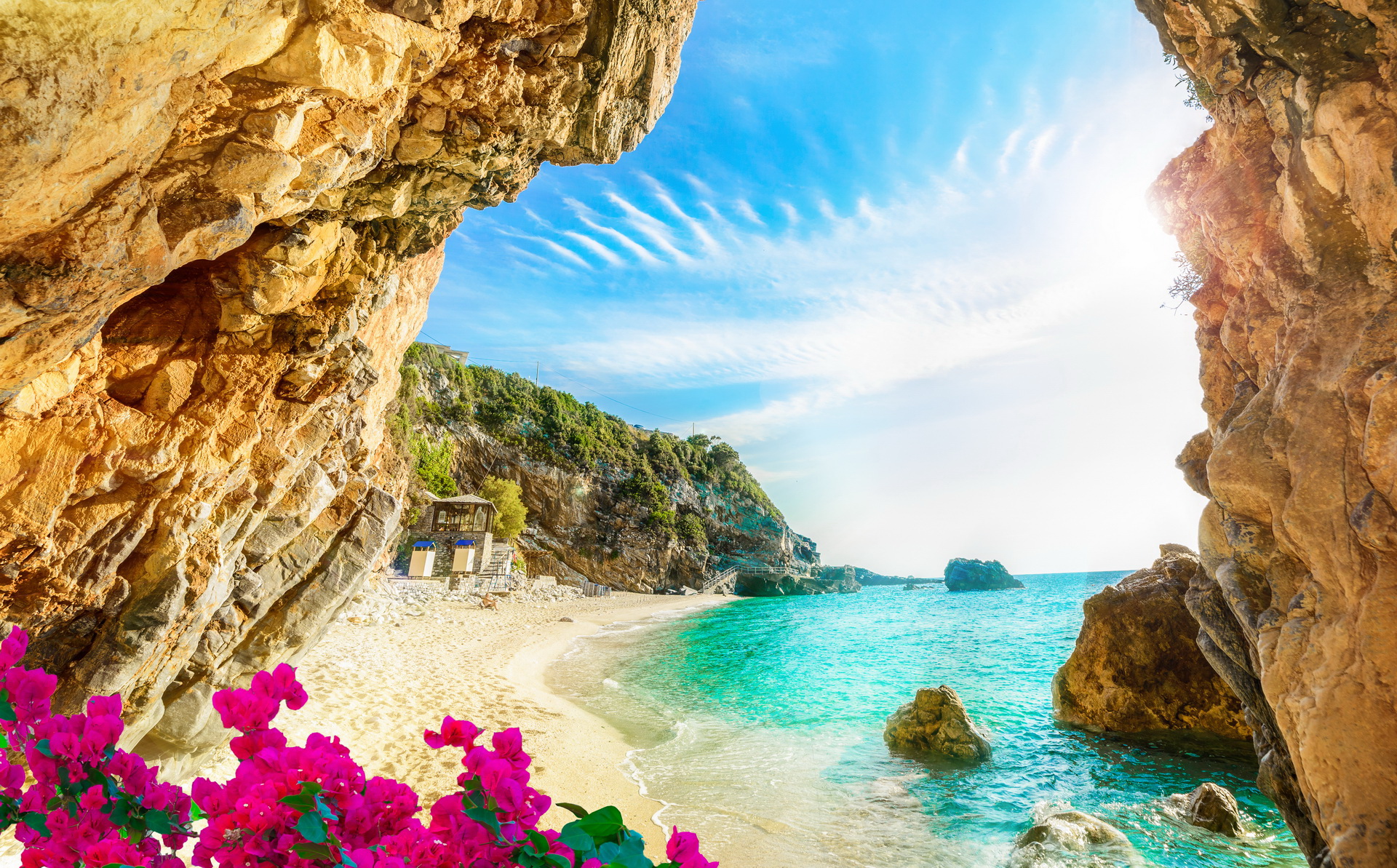 Welcome to the island of the Phaeacians: an emerald-green island in the turquoise blue waters of the Ionian Sea. Corfu is the greenest island in Greece and can totally impress you with the numerous cultural influences from Romans, Venetians, Franks and British. The island has managed to retain the western-European culture and atmosphere without losing the Greek hospitality and vivid temperament of its inhabitants at all. Follow us to an exploring journey and discover the secrets and the different, amazing faces and sides of Kerkyra, as the island is originally called in Greek. Welcome in Corfu!

Flight to Corfu. Pick-up and transfer to your booked hotel. Hotel stay for 7 nights.
Previous Next

Day 2: Through the streets of Corfu Town

Follow us to a journey through time and learn all the trivia about the Corfiot history and the capital of the island. After visiting the gardens of Mon Repos – the summer residence of the Greek royal family until 1967 – you will continue with the visit of Jason and Sosipatros church, one of the most important churches dating back to the Byzantine times. Jason and Sosipatros were students and disciples of Apostle Paul who visited Corfu in 48 AD and are said to have introduced Christianity to the inhabitants of the island.
Further on to the centre of the old city of Corfu, included in the list of UNESCO’s World Cultural Heritage. The old city of Corfu with its narrow streets and its monuments with a history of 8 centuries stands between the New and the Old Fort, both built by the Venetians during their 500-year-dominion in the Ionian Islands. In the narrow streets of the old city you can find buildings with marble-flagged arcades hosting numerous galleries and souvenir shops. One of the most famous landmarks of the old city and favorite place for the locals is the enormous square of Esplanade (mostly known as “Spianada”), which is one of the largest squares in the Balkans. On the northern side of Esplanade stands the old city part of Kambiello, located by the sea.
Do not miss a visit to the patron saint of Corfu, Saint Spyridon, thought by the locals to do miracles. In the wonderful baroque-style church decorated with western-art wall and ceiling paintings, you can find the remains of the Saint in a sarcophagus and his silver slippers, which –according to the myth – Saint Spyridon wears every night and takes a walk in the streets of the old city. Saint Spyridon died in about 350 AD in Cyprus, but when the Arabs conquered Cyprus in 650 AD the remains of the former Bishop of Trymithous were taken to Constantinople (today Istanbul) and later in 1453 from there to Corfu, in order to be protected by the Ottomans. You will also visit the City Hall at the centre of the old town of Corfu and Liston with its arcaded terraces and fashionable cafes, built in 1807 by the French imperial commissioner Mathieu de Lesseps. The design was inspired by the Rue de Rivoli in Paris. One of the most famous beliefs about its name is that it was named after the list of the noble families of Corfu written on a wooden board; these families were the only ones allowed to cross this road. Last but not least, you will breathe some fresh air on the old fortress; you may climb a little, but the view is absolutely breathtaking! Return to your booked hotel. Hotel and overnight stay.

Day 3: Driving to the North

After having your breakfast at your hotel, you will drive along the coast to the northern side of Corfu. First stop: the mountain village of Ag. Athanasios where you will visit a small women’s monastery. As you keep driving to the North, you will reach the village of Afionas, where you can take a walk and admire the view of the open sea from the northern coast of the island. On your way back, you will drive by wonderful coastal villages and enjoy the romantic landscape with the natural harbors and the view of the Albanian mountains on the other side of the Ionian Sea.
Return to your booked hotel. Hotel and overnight stay.
Previous Next

Day 4: From Empress Sissi to Paleokastritsa

Our day begins with a visit of the famous Achilleion Palace, which was built for Empress Sissi and later belonged to Emperor Wilhelm II – an example of the romantic excitement for ancient culture in the 19th century. If you are lucky enough to find the upper level of the main floor open to the public, do not forget to see the painting of Franz von Matsch “The Triumph of Achilles”. It is said, that the painter committed suicide, after he realized that the wheel of Achilles’ s chariot seemed to have no movement. However, the palace as a building is not the only thing to see and admire at the site of Achilleion; the subtropical gardens of the palace with the two grand sculptures of the ancient Iliad’s warrior Achilles and the amazing view of the sea will impress you.
Later on you will drive to Paleokastritsa through the amazing landscapes painted with numerous shades of green and blue. In Paleokastritsa, one of the most old and famous fishing sites in Corfu with the numerous hidden bays, you will visit the men’s monastery of Panagia (Virgin Mary) which was founded in the 13th century. After exploring the bays and narrow streets of the village you will finally drive to Lakones, where you will admire the wonderful view of Paleokastritsa, and then to Makrades taking thus the way back to your hotel. Dinner and overnight stay.

Day 5: The West Side & the Mouse Island

Todayyou will visit the west coast of the island and the villages Sinarades und Pelekas will be the first stops of your day. In Pelekas you will have the chance to visit Kaiser Throne and the old observatory. Between 1908 and the first world war, Kaiser Wilhelm II spent his summers at Achillion Palace but  his favorite location was the village of Pelekas and we can easily understand why. Standing at his “throne” you have a 360 degree panoramic view of the island and one of the most impressive sunsets.
After admiring the exquisite view, you will drive to Perama for lunch and then to Kanoni, one of the most beloved sites in Corfu. Visit the monastery of Panagia Vlacherena and take one of the small boats to the Mouse Island (“Pontikonissi”), Corfu’s landmark. Return to your booked hotel. Dinner and overnight stay.
Previous Next
Previous Next

Day 6: Free Time Or you could optionally visit Paxos & Antipaxos

Enjoy your free day at your hotel, take a swim in the crystal clear waters of the island or do whatever else you want in order to feel relaxed.
Or you could optionally visit Paxos & Antipaxos
Follow us to a mini cruise and get to know the two brother islands near Corfu: Paxos and Antipaxos.
Your starting point will be the port of Corfu Town near the old fortress; you can enjoy the view of the east coast of Corfu till departure. The first highlights of Paxos are Laca Bay and the two breathtaking caves you will visit.
Take a swim in the turquoise waters of Antipaxos, the next stop of your mini cruise and little brother of Paxos Island. On the east side of Paxos, you will visit the idyllic harbor of Agios Gaios, where you will have the time to take a walk in peace and quiet. When the sun begins to set, you will sail back to the Town of Corfu. Return to your booked hotel. Dinner and overnight stay.

Day 7: A whole day in the South

Today you will drive to the South and visit the most important villages, which are literally hanging from the cliffs like bird nests. The southern part of Corfu is not so “touristically influenced” and still retains its purity. While the landscape around the village of Agii Deka – your first stop –is full with huge olive trees, the southwest coast of the island could be characterized as a dune landscape. Agii Deka is a picturesque village with narrow streets, traditional houses and romantic scenery. The view it offers will remain for ever in your minds and hearts. Even deeper in the South you reach and explore Chlomos, a village which also offers a wonderful view; from the highest point of the village you will have the chance to admire the dreamy green coasts of the island and also the Greek mainland on the opposite side. Come closer, observe and be part of the Greek traditions and the Corfiot way of life. Further on, you will drive to the sand beach of Marathias, where you will have lunch and take a swim. Return drive to your booked hotel along the east coast. Dinner and overnight stay.

Free time according to your departure time. Transfer to the Airport of Corfu „Ioannis Kapodistrias“ and departure.
×