Olympic spirit
the paths of history 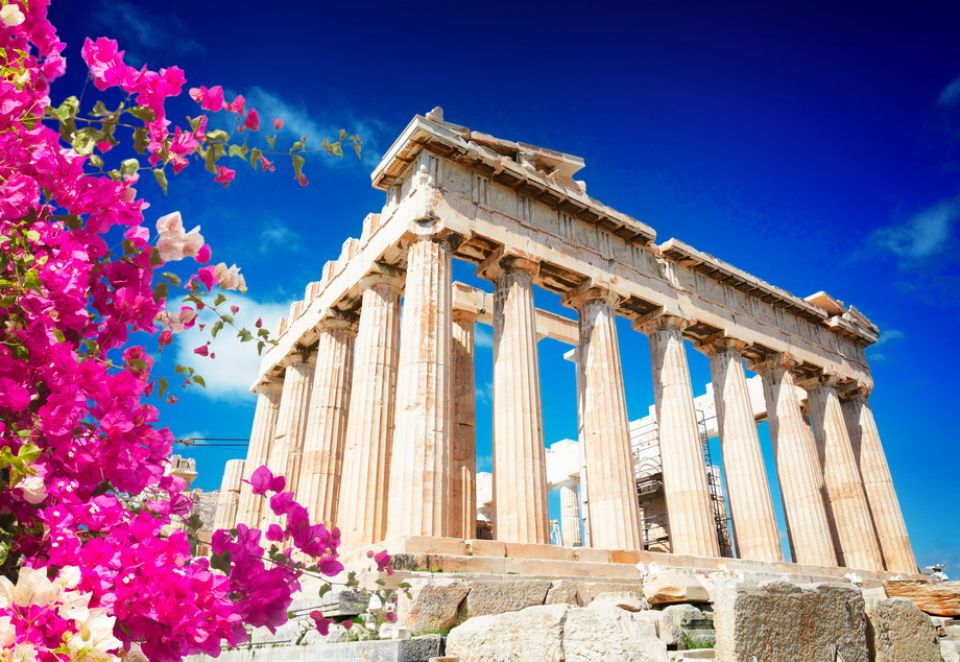 Flight to Athens International Airport “Eleftherios Venizelos”. Welcome in Athens, a metropolis of the ancient world! Transfer to your booked hotel and afterwards dinner at a local tavern with delicious specialities. 2 overnight stays in Athens.

Day 2 Your first “Marathon run” along the paths of history

During the first day of your trip, you will “run” along some of the most important stations of Greek history. In the morning, while you still have a lot of “stored” energy, you will climb up to the Acropolis Hill, the landmark of Athens. On the more than 2,500 years old Greek monument you can admire the remnants of a glorious era: the marble Parthenon; the magnificent Propylaea; the delicate Erechtheion with the Caryatid Porch.
Directly afterwards, you will head to the Panathenaic Stadium, where the first modern Olympic Games took place in 1896 and the Marathon run ended during the Olympics of 2004. The today existing stadium is constructed on the site of the ancient stadium of Athens. And speaking of the devil, you will have the chance to… not run, but drive the whole distance to Marathon: 42.195 km. The place is worldwide famous for its great battle where Athenians defeated the Persian army in 490 BC. The name of the athletic long-distance endurance race, the “marathon”, comes from the legend of a Greek runner, who was sent from the town of Marathon to Athens to announce that the Persians had been miraculously defea

Day 3 Foreseeing the future at the Oracle of Delphi

Delphi: the most prestigious and authoritative oracle in the Greek world, as well as a UNESCO world heritage site. Delphi is known for its theater, its ancient ruins and of course the Temple of Apollo with the Oracle, where Pythia predicted the future with equivocal sayings. Delphi has been characterized as “the Navel of the Earth”; according to the Greek mythology, Zeus is said to have let two eagles fly from the eastern and western extremities, and the path of the eagles crossed over Delphi where the “omphalos” or navel of Gaia was found.
In the region of Delphi, the Panhellenic Pythian Games took place in honor of Apollo and in remembrance of the extermination of the dragon Python by the Olympian god. Initially the games were musical, with the eulogy and the pantomime added later on. In the 4th century B.C., dithyrambic and dramatic competitions were held and only towards the end of that century were the athletic events added. The Games were held in the summer of the third year after the Olympic Games and the winners were crowned with a laurel wreath.
Further drive to Olympia .Overnight stay at your booked hotel.

The archaeological site of ancient Olympia: a worldwide symbol for unity, peace and good sportsmanship. We will have the chance to walk through the area where athletes trained for the Olympic Games and admire the Temple of Zeus (once hosting the nowadays nonexistent Statue of Zeus, one of the 7 wonders of the ancient world), the altar of the Olympic flame, the Stadium and the Museum.
After visiting Olympia, you will further drive to the prefecture of Argolis, where you will visit one of the jewels of Peloponnese. Nafplion was the first capital of modern Greece and is widely known as one of the most idyllic and romantic Greek cities. Today, you will have the freedom to discover Nafplion at your own disposal. You can take a walk through its picturesque streets with the wonderful buildings; visit the Archaeological Museum and the Komboloi Museum in the center of the old city; admire the fortified islet of Bourtzi standing on the background, while drinking your coffee or having lunch at one of the numerous cafés and taverns.
And as this trip is for those in good shape, Palamidi Castle is totally recommended. In order to reach it, you have to climb all of its 999 steps carved into the rock. The castle where the most important hero of the Greek Revolution Theodoros Kolokotronis was imprisoned is absolutely worth your time and energy; the view from above is breathtaking! Further drive to the town of Tolo, where you will stay for 2 nights.

How about visiting one of the greatest theaters ever built in history? The ancient theater of Epidaurus is a wonder of architecture because of the absolute uniqueness of its acoustic. It is worth wondering how architects of ancient Greece managed to create such an architectural masterpiece using the knowledge and machinery of that time. The theater dates back to the 4th century B.C. but still hosts theatrical plays for 14,000 spectators. People from all over the world attend theatrical plays and concerts in Epidaurus, especially in summer months, as the experience offered at this theater is unique. After all, all people would like a little bit of drama in our lives!
Epidaurus was an ally of the Athenians and later of the Corinthians. The famous Asclepieia, athletic games and music competitions, were held here every 5 years. Thousands of musicians and athletes from all over Greece came to Epidaurus to participate in those games. Apart from the theater, the most important historic monuments in Epidaurus are: the Temple of Asclepius which dates back to the 4th century B.C. and was designed and built by the architects Theotokos and Thimotheos; the Healing Temple Asclepieion, designed for 250 patients (70.92 m x 9.42 m); the Library, built by the Roman emperor Antonios and his successors; the Gymnasium (69 m x 53 m).
Afterwards, you will drive to ancient Nemea, the place where one of the most important ancient Greek sport festivals was instituted: the Panhellenic Nemean Games. The archaeological site includes the stadium of Nemea, which could host 40,000 spectators, and the sanctuary and temple of Nemean Zeus. Part of the latter was being reconstructed from 2002 to 2013.

Not far away from Nemea, in ancient Isthmia, another important ancient Panhellenic festival used to take place: the Isthmian Games. Conducted every two years, in spring, to honor god Poseidon, the games took place at the god’s sanctuary and lasted for three days. The program of the Isthmian Games included gymnic equestrian and musical contests, the former being probably the oldest. They were open to boys, men, and youths, well grown but not quite matured to manhood. You will visit the Sanctuary of Poseidon (first built in the 7th century BC, and reconstructed three times from the middle of the 7th century BC to 146 BC), the Stadium, the theater (for the musical contest), as well as the Archaeological Museum of the region containing exhibits discovered during excavations at the site.
On your way to Athens, you will have the chance to cross the famous Corinth Canal; until 1893, seamen had to travel around the rugged shores of Peloponnese to land e.g. in Sicily. The spectacular cutting through the Isthmus between the Saronic and the Corinthian Gulf clearly reduced the sea routes from Athens to the Mediterranean Sea. The builders blew up the rock at a length of 6.34 km, dug 60 m deep in the earth and created a shipping channel 24.5 m wide and 8 m deep. In the late afternoon, you will reach your hotel on the Athenian Riviera. If you are still in the athletic mood, you can enjoy a swim. 2 overnight stays at your booked hotel. 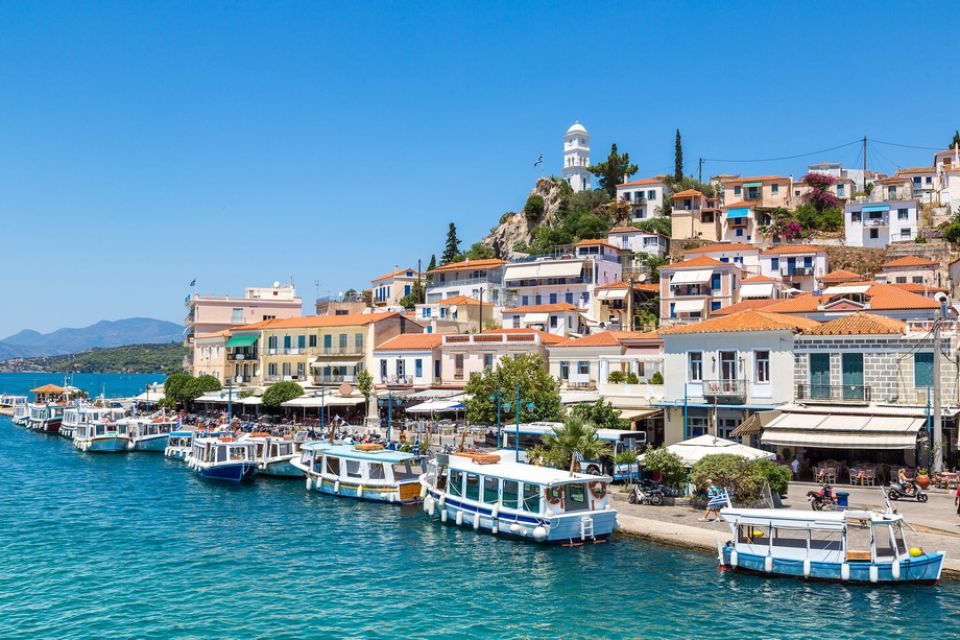 Take a cruise to the fabulously traditional Greek islands of Hydra, Poros and Aegina for a relaxing day on the sea. With all your transport, transfers and lunch organized, you can just enjoy your cruise with free time on each island to explore.
Poros
Poros is the smallest of the three islands you will visit during your cruise. The island is separated from Peloponnese by a narrow strait, which offers an enchanting view of Poros town. In antiquity, Poros consisted of two islands, Sphería and Kalávria, but the last explosion of the Méthana volcano in 273 BC radically changed the morphology of the area. Sphería was cut off from Méthana, and thus Póros took its present-day form. The landscape of the island consists of lush pine trees vegetation, crystal clear beaches, a lively waterfront adorned with shops, cosy cafes and restaurants, a picturesque capital (it has been declared protected settlement) with grand traditional mansions and picturesque cobbled streets; all ingredients of a quiet, yet cosmopolitan, destination.
Hydra
The amphitheatrical shape of the island provided a safe shelter from Saronic Pirates. As soon as you disembark, the small narrow stone-paved streets are expecting you to explore them on foot or by the island’s traditional “vehicle”, the cute donkeys. Walk along the old promenade, take a swim in the crystal clear blue waters and find the most appropriate souvenir for you in the traditional fine-craft shops.
Aegina
The largest of the three islands to be visited during your cruise. According to the myth, Aegina took its name from a nymph, daughter of the river god Asopos, whom Zeus fell in love with and took with him to the island. From January 1827 to October 1829, Aegina town was the temporary capital of the newly founded Greek state. During that period, Governor Ioannis Kapodistrias had wonderful neoclassical mansions built to house his headquarters. Apart from the mansions, other significant attractions and sites of the island are the Temple of Apollo, the medieval capital of Paleohora, the Church of Saint Nectarios and of course, the Temple of Aphaia. Interesting historical fact: the latter forms an equilateral triangle with the Parthenon and the Temple of Poseidon at Sounion, the so-called “holy triangle” of the antiquity.