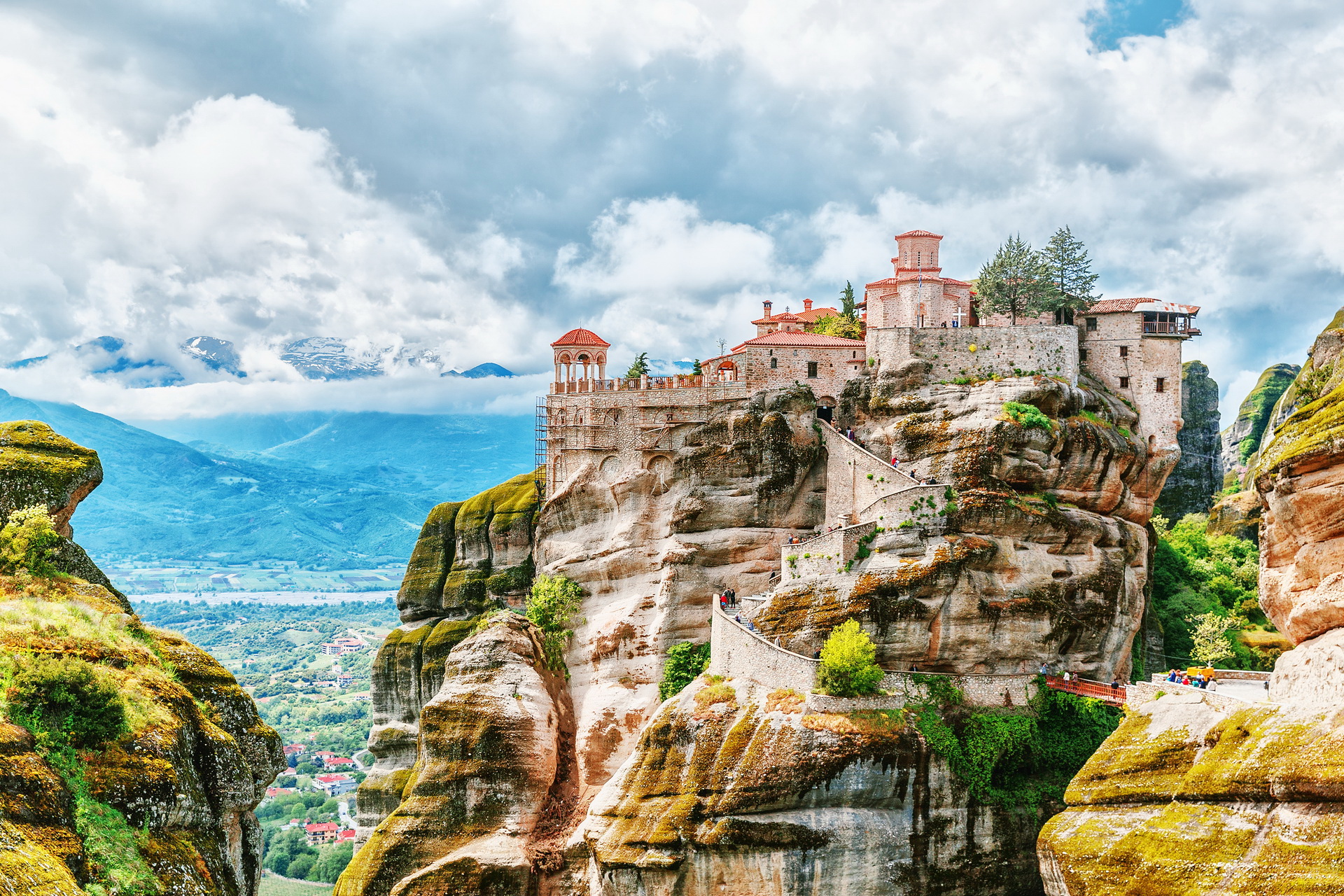 “The United Nations Educational, Scientific and Cultural Organization (UNESCO) seeks to encourage the identification, protection and preservation of cultural and natural heritage around the world considered to be of outstanding value to humanity. This is embodied in an international treaty called the Convention concerning the Protection of the World Cultural and Natural Heritage, adopted by UNESCO in 1972.”
In Greece there are 16 cultural and 2 “mixed” monuments/places protected by UNESCO.
9 of them will be the focal point of this travel program. Follow us to a wonderful journey through history and time!

Arrival at Athens International Airport “Eleftherios Venizelos” for a promising journey through the Greek mainland. Before being transferred to our booked hotel, we will have the chance to take a walk. What is better than a walking tour in Athens, in the heart of Greek daily life? The walking tour will become even better as you enter the famous Plaka and Monastiraki with the numerous cafés and souvenir shops. By walking through the narrow streets and near their neoclassical buildings, it will be like travelling back in time. During your walk you can also visit the city part of Kolonaki, whose streets host some of the most famous and expensive brands, such as Prada, Louis Vuitton and Ralph Lauren. 2 overnight stays in Athens.

Experience the glory of important monuments from the bus perspective: the Panathenaic Stadium, where the first modern Olympic Games took place in 1896; the Presidential Mansion, which was the Royal Palace until 1974; the Parliament House, palace of the first king of Greece, Otto von Wittelsbach; the numerous neoclassical buildings from the 19th century surrounded by the main streets of Athens. In the center you can find the squares, where you can be part of the social life and nightlife of Athens.

The Monastery of Dafni was built in the 6th century AD on the site of the ancient sanctuary of Apollo Daphnaios, which was destroyed during the invasion of the Goths in 395 AD. The second phase, dating back to the end of the 11th century (around 1080), is the one preserved. The interior of the church is decorated with superb mosaics (end of the 11th century) and are regarded as a unique, fine example of the Classical idealism of Middle Byzantine art. The crowded scenes of the mosaics narrate scenes from the life of Christ and Virgin Mary. The individual figures represent archangels, prophets, saints, martyrs and bishops.
Further drive through the mountains of Attica to the Monastery of Hosios Loukas, a masterpiece dating back to the Byzantine times and one of the most impressive monuments in the Mediterranean region. The monastery is situated in a picturesque valley teemed with olive trees and consists of two magnificent Byzantine churches decorated with frescoes and mosaics, with their characteristic golden background (10th-11th century AD). The oldest one is the church of Virgin Mary (middle of the 10th century AD), while the largest one was built a little later (early 11th century AD) and it is dedicated to the founder. The Byzantine abundance of the monastery still functioning today was recently brought to light due to a successful restoration project. Both monasteries were included in the UNESCO World Heritage List in 1990. At the end of the day, drive to our booked hotel in Delphi for 1 overnight stay.

Situated in a spectacular natural setting at the foot of Mount Parnassus, Delphi is the most prestigious and authoritative oracle in the Greek world. It is known for its theater, its ancient ruins and of course the Temple of Apollo with the Oracle, where Pythia predicted the future with equivocal sayings. Delphi has been characterized as “the Navel of the Earth”; according to Greek mythology, Zeus is said to have let two eagles fly from the eastern and western extremities, and the path of the eagles crossed over Delphi, where the “omphalos” or navel of Gaia was found. The archaeological site of Delphi was included in the UNESCO World Heritage List in 1987.
Further drive to Olympia for 1 overnight stay.

Day 5: A trip back to the first Olympics

The archaeological site of ancient Olympia was built on the banks of the Alpheios River: a worldwide symbol for unity, peace and good sportsmanship. This is the area where athletes trained for the ancient Olympic Games (introduced in 776 BC). The archaeological site includes the Temple of Zeus (once hosting the nowadays nonexistent Statue of Zeus, one of the 7 wonders of the ancient world), the altar of the Olympic flame, the Stadium and the Museum, where we can find the famous statues “Hermes of Praxiteles” and “Nike of Paionios”. Ancient Olympia was included in the UNESCO World Heritage List in 1989.
Further drive to Sparta for 1 overnight stay.

Mystras or the “wonder of Morea”, as it is known, was built at the foot of Mount Taygetus as an amphitheater around the fortress erected in 1249 by the prince of Achaia, William of Villehardouin. The city was reconquered by the Byzantines, then occupied by the Turks (it was the last Byzantine stronghold against the Ottomans, holding out until 1946) and the Venetians and finally abandoned in 1832, leaving only medieval ruins standing in a beautiful landscape and thus creating an impressive open-air museum. Mystras was included in the UNESCO World Heritage List in 1989.
Crossing over a part of the majestic Mount Taygetos, we drive further to Nafplion, the jewel of Argolis province. Nafplion was the first capital of modern Greece and is widely known as one of the most idyllic and romantic Greek cities. Today, we will have the freedom to discover Nafplion at our own disposal. We can take a walk through its picturesque streets with the wonderful buildings; visit the Archaeological Museum and the Komboloi Museum in the center of the old city; admire the fortified islet of Bourtzi standing on the background, while drinking coffee or having lunch at one of the numerous cafés and taverns. And for those in good shape, Palamidi Castle is totally recommended. In order to reach it, we have to climb all of its 999 steps carved into the rock. The castle where the most important hero of the Greek Revolution Theodoros Kolokotronis was imprisoned is absolutely worth our time and energy; the view from above is breathtaking!
Drive to Tolon, a wonderful, traditional fishing village, for 2 overnight stays.

Mycenae is Europe’s oldest fortress, the most important city of the Mycenaean civilization (it bloomed between the 15th and 12th centuries BC) and the stage for Iliad, one of Homer’s bloody epic poems. It all started in Aulis, where King Agamemnon sacrificed his own daughter Iphigenia, so that the Greeks could sail to Troy. After Agamemnon’s return from the Trojan War, Clytemnestra murdered her husband with the help of her lover, Aegisthus. Her children Elektra and Orestes in turn assassinated their mother to revenge the murder of their father. The story of Atrides’ dynasty has inspired the famous Greek tragic writers Aischylos, Sofokles and Euripides, whose tragedies and their modern adaptations are still being played in theaters all over the world. The Lion's Gate and the Treasury of Atreus are described as "outstanding examples of human creative genius".
Our journey back to the times of Mycenaean civilization continues, as we visit Tiryns. Tiryns was one of the most important cities of the Mycenaean civilization (it bloomed between the 15th and 12th centuries BC), but the first hints of human existence in the area date back to the Neolithic period (about 5000 BC). The construction of the fortification of the hill began during the 14th century BC and was completed at the end of the 13th century (late Helladic IIIB period). The Cyclopean walls surrounded the palace, the remaining public spaces, the Cyclopean tunnels leading to the storehouses and the workshops. The site had become deserted, when Pausanias visited it during the 2nd century AD. Both Mycenae and Tiryns were included in the UNESCO World Heritage List in 1999.
Further drive to the last stop of the day: Epidaurus. The ancient theater of Epidaurus is a wonder of architecture because of the absolute uniqueness of its acoustic. It is worth wondering how architects of ancient Greece managed to create such an architectural masterpiece using the knowledge and machinery of that time. The theater dates back to the 4th century BC, but still hosts theatrical plays for 14,000 spectators. People from all over the world attend theatrical plays and concerts in Epidaurus, especially in summer months, as the experience offered at this theater is unique. After all, we would all like a little bit of drama in our lives! Epidaurus was an ally of the Athenians and later of the Corinthians. The famous Asclepieia, athletic games and music competitions, were held here every 5 years. Thousands of musicians and athletes from all over Greece came to Epidaurus to participate in those games. Apart from the theater, the most important historic monuments in Epidaurus are: the Healing Temple Asclepieion, designed for 250 patients (70.92 m x 9.42 m); the Library, built by the Roman emperor Antonios and his successors; the Gymnasium (69 m x 53 m); the Temple of Asclepius which dates back to the 4th century BC and was designed and built by the architects Theotokos and Thimotheos. The sanctuary of Asklepios in Epidaurus was included in the UNESCO World Heritage List in 1988. It is a unique sample of combining innovative ideas both internally and externally in the history of ancient Greek architecture. Indeed, Pausanias considered it as one of the finest temples of Peloponnese in relation to sheer beauty and harmony and compared it only to that of Tegea.

On our way back to Athens we stop by the magnificent Cape Sounion. Cape Sounion is only 45 miles (70 km) away from Athens and thus the perfect destination for a sunny, lazy afternoon. The Temple of Poseidon, whose half of the Doric columns are still standing, is perched on a rocky hilltop overlooking the sea and offers an absolutely breathtaking, panoramic view of the Aegean sea. Afterwards, we drive to our booked hotel at the Athenian Riviera for 2 overnight stays.

Today we can enjoy our free time in Athens at our own disposal or optionally take a cruise to the fabulously traditional Greek islands of Hydra, Poros and Aegina for a relaxing day in the Saronic Gulf. With all our transport, transfers and lunch organized, we can just enjoy our cruise with free time on each island to explore.
Poros
Poros is the smallest of the three islands we will visit during our cruise. The island is separated from Peloponnese by a narrow strait, which offers an enchanting view of Poros Town.
Hydra
The amphitheatrical shape of the island provided a safe shelter from Saronic Pirates. As soon as we disembark, the small narrow stone-paved streets are expecting us to explore them on foot or by the island’s traditional “vehicle”, the cute donkeys.
Walk along the old promenade, take a swim in the crystal clear blue waters and find the most appropriate souvenirs for you in the traditional fine-craft shops.
Aegina
The largest of the three islands to be visited during our cruise has numerous interesting sites to visit, such as the Temple of Aphaia, the Temple of Apollo, the medieval capital of Paleochora and the Church of Saint Nektarios.

According to itinerary free time in the center of Athens, and afterwards transfer to Athens International Airport “Eleftherios Venizelos” and departure.
×