Crete; the island with the hundred faces and landscapes; the island where myth and history are closely related in a journey through time; here you can understand why “philoxenia” is a Greek word.

Arrival in the Heraklion International Airport “Nikos Kazantzakis”, transfer to your booked hotel in the region of Heraklion. Dinner and overnight stay for 7 nights.

On the first actual day of your journey you will visit the most famous palace in Greece. King Minos is waiting for you in legendary Knossos. His palace was built more than 3,500 years ago and it is worldwide known for its lively wall paintings and the enormous labyrinth built by the inventor and craftman Daedalus. The labyrinth was home of the Minotaur (part man and part bull), a creature born due to the mating of Pasiphae – Minos’s wife – with a bull. The creature was finally killed by the Athenian hero Theseus.
More information about the Minoan art and culture you will obtain at the Archaeological Museum of Heraklion, which is your next stop. After a day full of history and art, you will definitely need a break, so take some free time for yourselves; you can either go to the beach and relax in the clear blue waters under the hot sun or take a walk through the city and visit the Venetian fortress Koules, the Eleftherias Square (freedom square), the Morosini fountain with the lions and the Dedalou street, the city’s main street which is full of shops. Heraklion is one of the most important cities in Crete and worldwide famous as the motherland of Nikos Kazantzakis, the author of “Zorbas the Greek” (original English title “Life and Times of Alexis Zorbas”), a novel about philosophy and life made known through the film with Anthony Quinn. Dinner and overnight stay at your booked hotel.
Previous Next

Today you will drive to the countryside on the east side of the island. At the Lasithi Plateau you will find a landscape full of vineyards, fruit groves and gardens with fresh vegetables. Some old traditional windmills in the region will teach you about the traditional way of the fields’ irrigation. Short drive to Psychro, a village where – according to the Theogony of Hesiod – the greatest Greek god, Zeus, was born.
Mythology comes in contrast to Christianity, as your next stop will be the female monastery of Kera Kardiotissa, famous for its icon of Virgin Mary: the legend has it that the icon miraculously flew back to Crete after having been stolen twice by the Turks and transferred to Constantinopole (today Istanbul). When the Turks attempted to steal the icon for the third time, they chained it onto a pillar. However, the icon returned again back to Crete – this time onto the pillar. The pillar can still be found exhibited at the monastery and it is thought to do miracles. Return to Heraklion. Dinner and overnight stay at your booked hotel.

Day 4: From the Minoan palaces to the leper colony

Malia is the second most important Minoan excavation in Crete. Its palace was built about 4,000 years ago, but about 300 years later it was destroyed by an earthquake. Near the palace there was the necropolis of Malia’s royals, famous for the golden bee pendant which was found there and now is an exhibit of the Heraklion Archaeological Museum.
Further drive to the wonderful port of Agios Nikolaos and afterwards another 15 minutes drive to Elounda, in order to get the boat to the small island of Spinalonga. In Spinalonga, you will learn about another important historical period of modern Greece. Behind the walls of its old Venetian fortress, a whole colony was “caged” there for decades. The people living there since 1903 were suffering from the Hansen’s disease, also known as leprosy. Spinalonga was closed and abandoned by most of its inhabitants in 1957 and was one of the last leper colonies in Europe. The view of Crete from the side of Spinalonga is really something magnificent. Return to Heraklion. Dinner and overnight stay at your booked hotel.
Previous Next
Previous Next

Day 5: Phaistos and the Myth of Europa

The journey on the trail of the Minoan continues with your next destination: through the Messara Plain with the olive trees you reach Phaistos, the second greatest Minoan palace in history. The most important finding at the excavation site of Phaistos was the famous Phaistos Disc, a disk of fired clay now displayed in the Heraklion Archaeological Museum. The Disc has attracted the attention of archaeologists and historians, because it depicts 45 unique signs (241 tokens in total in clockwise sequence) which do not belong to any known written language in the whole world. Some compare the mysterious language to the Linear A or the Anatolian and Egyptian hieroglyphs.
After exploring the mysteries of ancient languages, you will be driven to the bay of Matala on the southern side of the island, the famous site with the man-made caves (they are thought to have been made in the Roman or early Christian times) inhabited by the hippies mainly in the 60’s. Nowadays, the place is widely known for the lively beach parties and festivals being held there every summer. However, Matala is also known – according to the Greek mythology – for the myth of Europa, daughter of the king of Phoenicia. When Zeus looked at her, he fell in love with her and was transformed into a white bull in order to approach her. As she climbed on the bull, Zeus took her away and brought her to Crete. After their love affair, Europa gave birth to his three sons Minos, Sarpedon, and Rhadamanthys, and of course gave her name to the Old Continent.
Further drive not far away from Matala to the archaeological site of Gortyn, where it is said that the wedding of Zeus and Europa took place. In Gortyn you will find the old Roman capital city of Crete. Some of its most important monuments are the Basilica of Agios Titos, the Roman Odeon and the big inscription with Gortyna’s laws that is considered to be the biggest archeological discovery of the previous century.
After such a long tour, how about a glass of high-quality Cretan wine? You will visit and enjoy wine tasting at the Vineyard Zaxarioudakis, ranked as the most beautiful in Crete and one of the most beautiful in Europe because of its beautiful scenery on the hill of Orthi Petra. The varieties cultivated there are red Kotsifali, Syrah, Cabernet Sauvignon and Merlot, besides the white varieties are Vilana, Vidiano, Malvasia di Candia, Malvasia di Candia Aromatica and Sauvignon Blanc. http://zacharioudakis.com/

Day 6: On the west side of Crete – Chania & Rethymno

Today you drive to the west side of the island, to two of the most important cities in Crete; your first stop is Chania, a historical city combining the vividness of Crete with the Venetian atmosphere. The idyllic Venetian port, the churches, the palaces and city walls, as well as the Archaeological Museum in the former Franciscan church are only some of the city’s highlights. Chania is also the motherland of Eleftherios Venizelos, a major political figure of 20th century European scene, whose name was given to the Athens International Airport.
Another city with a characteristic air of history and tradition is Rethymno, the third largest city in Crete. Visit the beautiful graphic harbor, the old part of the city with the fortress and the Venetian-Ottoman quarter which is a maze of colourful narrow streets, graceful wood-balconied houses and ornate Venetian monuments.
Previous Next 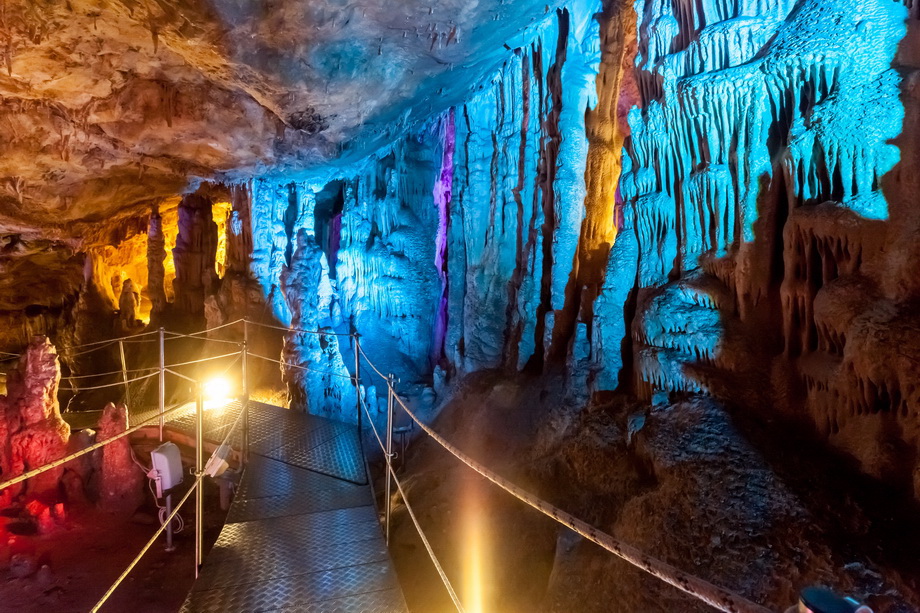 Your last excursion in Crete combines nature and culture: visit the small, traditional villages of Anogia and Zoniana in central Crete and find out what gives the Cretans so much joy and passion for life. In Zoniana you will have the chance to get into the limestone cave of Sfendoni. You driver further to Margarites, a pottery village, where you learn a lot about the traditional art of pottery.
Last but not least in the list of your visits is the monastery of Arkadi, a symbol of the Cretan revolt for freedom against the Ottomans in 1866. During the battles between the Cretans and the Ottomans, 943 Greeks, mostly women and children, sought refuge in the monastery. After three days of battle and under the abbot’s orders, the Cretans blew up barrels of gunpowder, choosing to sacrifice themselves rather than surrender. The monastery is not only a symbol of Crete, but mostly a symbol of sacrifice and freedom for all Greeks. The 8th of November is a day of commemorative celebrations in Arkadi and Rethymno.